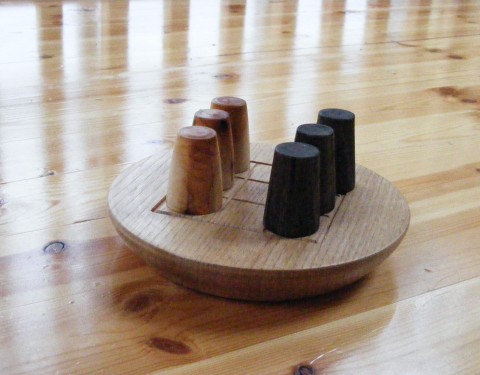 “To the ancient Celts, the Morris Square was sacred: the centre considered a symbol of regeneration; and emanating out from it, the four cardinal directions, the four elements and the four winds.” (Simonds, 1997)

Brian Boru was the last High King of Ireland. Brian was born in Killaloe, Co. Clare. He defeated the Vikings at Battle of Clontarf in 1014, but was killed by a fleeing Viking named Brodir. He was laid out under a Yew tree at the Battle site.

Brian Boru’s chess, also called Three Men’s Morris, is an ancient game, dating back to Egyptians & Roman records. Boards were cut into cathedral cloister seats throughout Medieval England, including Westminster Abbey. In China the game was called LukTsutk’I and dates back to at least the time of Confuscius (Bell, 1995).

Timbers handcrafted for the game:

The mainboard is chestnut. Pieces are made from yew, one of the mythical timbers of Ireland, the ‘tree of life’. The black pieces are made from bog oak, 5 thousand year old wood, formed by glacial action on timber buried in Irish bogs.

RULES OF THE GAME: